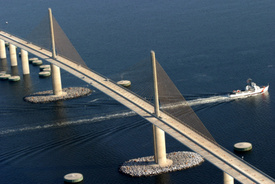 Massena, NY (www.NewYorkInjuryNews.com) – Four Coast Guard officers and two Akwesasne men were injured after a boat chase on the St. Lawrence River ended in a crash on Monday, April 12, 2010, as reported by Watertown Daily Times and WCAX.com. The boat crash occurred near the Seaway International Bridge.

Shortly before 9 p.m. Monday evening, the U.S. Coast Guard was called to help Canadian authorities who were attempting to stop a 15-foot private vessel underneath the Seaway International Bridge near Massena. The two men, citizens of the St. Regis Mohawk Reservation, were allegedly traveling in their boat at a high speed with no running lights. The men were being pursued by four law enforcement agencies from Canada and the U.S., when their vessel was collided with a 25-foot U.S. Coast Guard patrol boat. The collision threw the two men from the boat.

The names of the men and their conditions were not released, as of Thursday, April 15, 2010. The men were originally transported to Massena Memorial Hospital, as reported by the chief of the Hogansburg Fire Department. It was rumored they were transferred though, according to various sources. There was no new information on the men’s whereabouts as of Thursday.

The four Coast Guard personnel were treated at the Massena hospital and later released.

The investigation is being performed by the Coast Guard and St. Regis Mohawk tribal police.