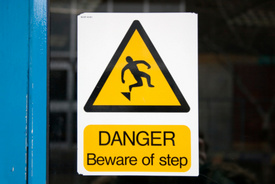 Legal news for Rhode Island personal injury attorneys: Woman sues city and building contractors for negligence that led to a fall that broke her hip; Awarded $238,000.

Narragansett, RI (www.NewYorkInjuryNews.com) – On April 6, 2010, an award of $238,000 was granted to a woman who sued the Rhode Island town of Narragansett after she broke her hip as a result of a fall in 2007, as reported by South County Independent. The parties used an arbitrator to reach the decision.

Priscilla Chappell, 77, filed a lawsuit in June 2008 claiming the town’s negligence resulted in her falling during a memorial service at the Towers on Ocean Road. The fall caused the woman to break her hip, thus deeming her 37 percent disabled.

According to reports, the third floor of the building had been raised to accommodate a new radiant heating system that was installed between 2002 and 2003. Apparently, raising the floor created a slope and six-inch drop in front of a door that leads into a storage area used by caterers. The area under scrutiny was not typically accessed to the public.

Because Chappell was found partially responsible for accident, the award amount was reduced by $35,700. After adding interest of 29 percent, the final award stood at $260,967 at the time of the arbitrator’s decision.

The arbitrator explained, “All defendants were negligent with respect to not ensuring that the invited public effectively knew about the step down into the kitchen area.”  Further negligence lied within the improper design and approval of the floor’s incline and not ensuring the design was code appropriate or safe. Lastly, the town failed to properly label the step with a warning sign.

The defendants have 30 days from the date of the decision to appeal.