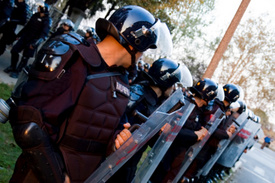 Legal news for Maryland personal injury attorneys – A Univ. of Maryland student plans to sue officers who were caught on tape beating him with batons after a Duke game.

Student beat by police claims brutality and cover up, plans to sue.

College Park, MD (www.NewYorkInjuryNews.com) – John McKenna, a University of Maryland student who was severely beaten by officers on March 4, 2010, plans to file suit against the officers involved, as reported by ABC News.

McKenna, 21, still suffers from the physical injuries he received in March after police officers in riot gear attacked the unarmed student and beat him with batons. The incident happened after a Maryland – Duke basketball game, where excited students were celebrating in the streets.

McKenna was beaten until he was unconscious in the street, suffering a concussion and defensive-type bruises on his arms. Eight staples were required to close his skull, as reported by the student’s attorney.

His attorney elaborated during an interview on “Good Morning America,” “He’s a young man…and he’s recovering from the physical injuries, but obviously there was quite a bit of emotional distress he suffered in the incident.”

A video that caught the beating surfaced across national media outlets Tuesday, April 13, arming the student with proof that he was unarmed and the attack was unprovoked.

McKenna’s attorney also claims police cover up. A sworn statement by police state McKenna “struck those officers and their horses, causing minor injuries.” The officers charged McKenna with inciting a crowd, although his charges have since been dropped.

The cover up carried into McKenna’s ambulance ride, where officers allegedly told the victim not to point out his wounds, saying “…if you want to go home tonight, don’t complain about your injuries.”

Prince George’s County Police Chief Roberto Hylton suspended one of the officers identified from the tape. He told reporters other officers will likely be fired as well.

An investigation has been launched.