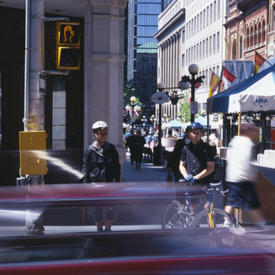 Legal News for New York automobile accident attorneys – A Manhattan driver ran a red light and hit a cyclist, dragging him over 50 yards down the street – Biker pronounced dead at scene.

Brooklyn, NY (www.NewYorkInjuryNews.com) – A Brooklyn cyclist was killed Wednesday, April 14, 2010, after a driver ran a red light, hitting the biker and dragging him over 50 yards, according to New York Daily News and the Gothamist. The driver was operating the vehicle under a suspended license.

Jake McDonough, 18, of Kensington, was riding east on Beverly Road at approximately 9:30 a.m. when he entered the intersection at Flatbush Avenue and was struck by a driver running a red light. A witness reported the cyclist became stuck under the van and was dragged a half block down the street.

McDonaugh was pronounced dead at the scene.

The driver was 28-year-old Michael Oxley. He was charged with criminally negligent homicide, amongst other charges. Oxley’s driver’s license has been suspended three times for failing to pay fines for improper turns and speeding.

McDonaugh was an artist who sold his work in SoHo. He worked under the pseudonym Drip.

A friend and coworker of McDonaugh wrote, “Jake was one of the most, if not the most, unique, talented and dedicated people I have ever known…”

On the same day as this fatal incident, two other bicyclists were injured from bicycle-automobile collisions. There was also a pedestrian-involved accident.