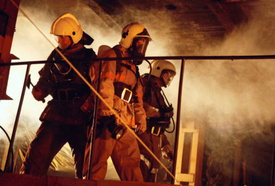 Legal news for New York personal injury attorneys – A seven alarm fire broke out in Chinatown and took over four hours to put out – 30 people were hospitalized.

New York City, NY (www.NewYorkInjuryNews.com)- A seven-alarm fire broke out in Manhattan’s Lower East Side Chinatown Sunday, April 11, 2010, requiring the aid of at least 250 firefighters and injuring over 30 people, as reported by Syracuse.com.

The fire broke out shortly after 10p.m. and reached seven alarms at approximately 12:15 a.m. The blaze was not brought under control until 2:15 a.m., according to reports. Over 250 firefighters from 66 units responded to the fire.

The Manhattan blaze began in a six-story residential and commercial building and spread through a shaft to the roof before reaching three other buildings. Fire Department spokesman James Long told reporters, “there are three buildings that are gone,” and added the building where the fire originated sustained the least amount of damage.

Grand Street remained blocked off until mid-morning Monday and the cause of the fire remains under investigation. All four buildings had been evacuated.

The American Red Cross is helping approximately 60 of the displaced families.