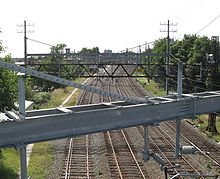 New Haven, CT (www.NewYorkInjuryNews.com) – A 30-year Metro-North railroad veteran was awarded $1.08 million after the commuter railroad admitted fault in a 2006 accident that severely burned the man’s hand and arm, as reported by The New Haven Register.

Jim Deacon, 51, of Southbury, was working on a malfunctioning switch box next to an electrified third rail in the Mott Haven section of the Bronx, NY, on October 28, 2006,  when he took his rubber gloves off to thread a small wire. Unknown to Deacon, a cable from the third rail had detached and the motor housing was electrified. When the wire touched the housing, a 700-volt explosion ensued, severely burning his left hand and forearm.

Deacon remembered, “This whole hand was black with skin hanging off of it.”

Deacon claimed that it was standard practice to leave the power on when making repairs such as the one he was performing that day. He said that complaining resulted in disciplinary action, “or you’d just be made a pariah. …They’ll just start giving you a hard time somehow, they’ll make you miserable.”

A railroad safety consultant analyzed the accident and concluded, “It was standard practice in the Metro North Test Department not to de-energize the 700 volt power to the switch box when performing that troubleshooting repair.”

While company procedures require the power be turned off before working on high-voltage equipment and regular inspections be performed, it appeared the switch box had not been checked in years.

Metro-North settled right before the case went to court. A spokeswoman for Metro-North confirmed the railroad took liability for the accident.

Deacon returned to work after the accident, but suffered from post-traumatic stress and left on his physician’s advice in June 2008.