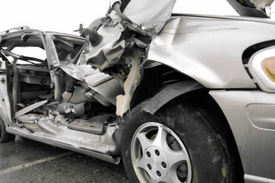 Legal news for New York automobile accident attorneys – A semi sped through a red light and crashed into a car carrying mother and daughter, killing both and injuring others.

Bethpage, NY (www.NewYorkInjuryNews.com) – A mother and daughter were killed in a Long Island crash that involved several vehicles and a tractor trailer Wednesday, April 7, 2010, as reported by WCBSTV.

The crash happened during rush hour traffic, shortly before 6 p.m., at the intersection of Central Park Avenue and Hicksville Road. Witnesses reported the tractor trailer ran a red light and broadsided a Pontiac that was making a left hand turn on to Hicksville Road.

The Pontiac was so severely crushed that rescuers had to cut off the roof to get to the victims. The mother and her 11-year-old daughter were rushed to the hospital, but later succumbed to their injuries and died.

Police reported at least three other vehicles were involved in the crash.

A nearby resident reported her house vibrated as a result of the impact. Others described the intersection as dangerous, where vehicles often run yellow and red lights.

The truck belongs to C-F-M Food Distributors of Watertown.

The driver of the truck was given a breathalyzer, as reported by WABC–TV, but the results were unknown to the public as of April 8, 2010.

There has been no report of charges yet.