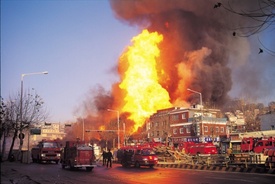 Back Bay, MA (www.NewYorkInjuryNews.com) – A nine-alarm fire in a ten-story condominium building Wednesday, April 7, 2010 left millions in damages and three hospitalized, as reported by The Boston Globe.

The Beacon Towers, a building that housed over 150 people, was the source of the largest firefighting operation the city has experienced in years. Conditions of the fire were worsened by the record-setting heat and cramped stairwells. Approximately 180 of the city’s 264 firefighters on duty were sent to the fire.

Of the four people rescued from the blaze, one woman suffered cardiac arrest, which completely stopped her pulse and respiration. Firefighter Scott Coyne performed CPR and Lieutenant Robert Dean gave the woman his face piece. One firefighter was reportedly hospitalized with chest pains.

The lack of sprinklers was an issue of concern for fire officials. The building was grandfathered into protection from fire codes that went into effect 25 years ago and thus did not install a sprinkler system. Condominium units in grandfathered situations are exempt, according to Steve MacDonald, a Fire Department spokesman.

A 10th-floor resident, Richard Steffenghan, told reporters that discussions on installing sprinklers took place over 20 years ago, but were decided against after realizing the cost. He said it was a matter of hundreds of thousands of dollars.

MacDonald approximated the fire caused $3.5 million in damages. A one-bedroom unit was recently listed for sale at $275,000.

While officials are looking into the initial cause of the blaze, they expressed their beliefs that it began in a seventh floor unit.