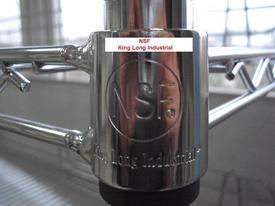 The Six Tier Chrome Shelving Units were manufactured in China and sold at Costco Wholesale Club locations nationwide from December 2009 to January 2010. The shelves retailed at approximately $90.

According to the CPSC report, the shelving unit casters can break at the stem which would cause the six tier unit to collapse or fall, posing an injury hazard to nearby persons. The CPSC and King Long Metal Industrial Company, Ltd. advise consumers to stop using the recalled items immediately, unless otherwise instructed.

No injuries have been reported to the company, but one incident of faulty product was reported.

One can identify the units through the unit model #392360 that is imprinted on the corner collar on the side of the shelves.

Consumers are advised to immediately remove the casters and use the six-tier shelving unit with the adjustable feet levelers included in the original package. King Long Metal Industrial Company, Ltd. is supplying replacement castersConsumers may call King Long Customer Service toll free at (888) 445-9355 between the hours of 9 a.m. and 5 p.m., ET, Monday through Friday. An email can also be sent to customerservicegsm@sbcglobal.net.