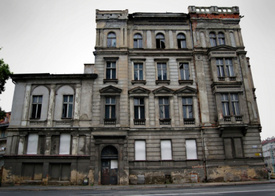 Legal news for New York personal injury attorneys – Around 30 tenants at a Bronx apartment have filed suit against their landlord, claiming he is the worst in New York.

Landlord ignores requests for repairs, including rats and broken windows.

Bronx, NY (www.NewYorkInjuryNews.com) – Approximately 30 tenants from a complex located at 2710 Bainbridge Avenue joined forces with attorneys from the Urban Justice Center and the Northwest Bronx Community and Clergy Coalition to announce a lawsuit against the landlord, Frank Palazzolo, on Thursday, May 1, 2010,  as reported by NY1. The residents claim the man has ignored numerous pleas for major apartment repairs.

The tenants protested outside the apartment on April 1, 2010 and told the press that the landlord refuses to fix crumbling walls, moldy tiles, clogged drains and broken windows. Some claim to have replaced the broken windows to their units with plywood in order to keep the cold out. The tenants allege that the lack in repairs has put their lives at risk.

A tenant by the name of Peggy Vargas told reporters “All of our outlets don’t work. You hear rats fighting in the wall. You can hear them, I mean, I run out of the apartment sometimes I’m so scared. The doors are not locked. I come in late and I don’t know who’s going to hit me. I pay $1,500 in rent.”

According to New York Daily News, around a year and a half ago, the Department of Housing Preservation and Development (HPD) listed the building as one of the 200 worst maintained in the city. The HPD currently reported that Palazzolo has approximately 200 serious violations filed against him. The building is part of the alternative-enforcement program, which tries to put the worst landlords together and force them to make repairs. The tenants report that since the building became part of the program in 2008, no repairs have been made.

While various members of the press have reached out to the landlord and the management company he oversees, Semper Fi Management, neither have been available for comment.