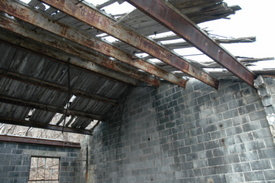 Legal news for Connecticut workplace injury attorneys – A man suffered third-degree burns and was hospitalized from an explosion in a New Milford heavy machinery repair shop.

New Milford, CT (www.NewYorkInjuryNews.com) – An explosion in a heavy machinery repair shop on Thursday, May 1, 2010, left a man injured and a building destroyed, as reported by WFSB. The explosion occurred at approximately 8 a.m., while the injured party was opening the shop.

Witnesses reported the explosion could be heard from miles away. Police reported that the business operator, Greg Lee, 50, of Roxbury, suffered third-degree burns as a result of the explosion and was taken to Bridgeport Hospital’s burn unit. He told officials he smelled propane when he left the building on Wednesday evening. He supposed it could have been from the forklift’s tank. He closed the shop, and upon his return Thursday morning, the smell was still there.

Lee attempted to open the garage door in order to air out the building and an explosion ensued.

The fire marshal suspects a spark from the garage door may have ignited the propane.

Lee was the only person in the building at the time of the explosion. He was concerned about his dog, though, due to the fact he brings him to work with him. To Lee’s relief, the dog was later found at a nearby business. Route 7, between routes 37 and 55, was closed while crews fought the flames that remained after the explosion. Drivers were told to avoid the area by rerouting to Route 39 or Stillson Hill Road or Church Street.