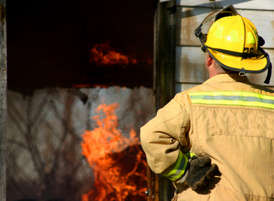 The cause of a Pittsburgh fire that injured three remains unknown.

Pittsburgh, PA (www.NewYorkInjuryNews.com) – A fire in Highland Park, Pittsburgh, PA, on Sunday, March 28, 2010, left a firefighter with a serious leg injury and two others suffering from smoke inhalation, as reported by the Pittsburgh Tribune-Review.

Pittsburgh police reported that the fire was reported at approximately 3:25 p.m. on Wellsley Avenue. By the time firefighters arrived at the scene, the home was engulfed in flames. Neighbors reported large flames and heavy smoke pouring from the second floor. The fire was brought under control at approximately 4:15 p.m.

The two homeowners, an elderly man and woman, were taken to West Penn Hospital in Bloomfield and treated for smoke inhalation. Officials reported the man had been trying to put the fire out before finally evacuating.

Pittsburgh Fire Chief Tim Kopicko reported, “It seems that the older gentleman was trying to extinguish the fire himself, with a little extinguisher, before he called 911…Please if you ever have a fire in your house, call 911 before you try to deal with it. Let us take care of it.”

The firefighter who was injured suffered a leg injury from an accident involving a ladder, according to police. He was taken to UPMC Presbyterian in Oakland.

The cause of the fire has yet to be determined.