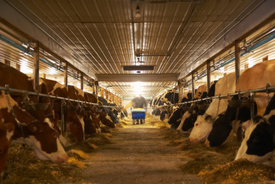 Legal news for personal injury attorneys – A New York dairy farmer has been cited for livestock violations, found to be repeat offender.

Wyoming, NY (www.NewYorkInjuryNews.com) – A New York State dairy farmer has been cited by the US Food and Drug Administration (FDA), www.fda.gov, for selling cows that carried illegal residues of antibiotics, as reported on March 26, 2010 by the FDA.

Jerald P. Schumacher, the sole proprietor of a farm in Wyoming NY which sold cows for slaughter and human consumption in Pavilion, has been ordered by the U.S. District Court for the Western District of New York to stop offering the animals for slaughter. Federal Judge Richard J. Arcara is overseeing the case.

The FDA complaint states that Schumacher has been selling cows that contained residues of the antibiotics penicillin and sulfadimethoxine, within the cows’ edible tissues, for at least the past 10 years. The agency also complains that Schumacher gave the livestock larger than allowed dosages.

The U.S. Department of Agriculture has cited Schumacher six times over the last 10 years for this issue, according to the FDA report.

According to the complaint, Schumacher also failed to keep adequate records of which cows were medicated.

Animals to be used for human consumption in the United States, such as chickens, pigs and cattle, are fed antibiotics to prevent disease and promote growth.  According to many American and European experts, overuse and misuse of antibiotics in animals for consumption poses a danger to both parties by encouraging the development of bacterial infections that are resistant to the antibiotics.