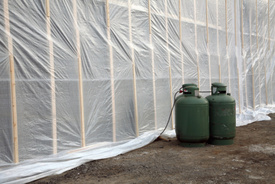 Legal news for Pennsylvania wrongful death attorneys – Family of a man who died from carbon monoxide poisoning in an Upper Macungie Township hotel has reached a settlement.

Philadelphia, PA – The family of a man who died of carbon monoxide inhalation at a Best Western has settled a federal lawsuit against the hotel and several contractors, according to The Morning Call.
Philip D. Prechtel, 63, of South Carolina, suffered carbon monoxide poisoning and died during a January 2008 stay at the hotel. The family filed suit July 2008.

According to reports, a makeshift canopy was placed on the side of the Best Western Allentown Inn & Suites during a remodeling project. The plastic captured carbon monoxide gas that was subsequently drawn into several rooms, including the room Prechtel and his wife Katherine slept in.

According to fire officials, the canopy had trapped gases emitted by three 80-gallon, gas powered hot water heaters. More than 400 parts per million of carbon monoxide were detected in the room, 10 times the lethal limit.

The family was seeking at least $350,000 for compensation of the loss of Prechtel’s household services, Social Security benefits and health insurance. The family was also seeking damages for the physical and emotional pain and loss suffered by Mrs. Prechtel.

The lawsuit charged wrongful death and negligence to KMD Hospitality Corp. of Allentown, which owns Best Western, and the contractors Martin Plastering Contractors of Terre Hill and Advanced Building Systems of Reading.

Martin Plastering was fined $2,300 in March 2008 by the U.S. Occupational Safety and Health Administration (OSHA), www.osha.gov, for failing to instruct its employees in identifying carbon monoxide hazards and for failing to detect the situation that lead to Prechtel’s death and several others’ hospitalization.