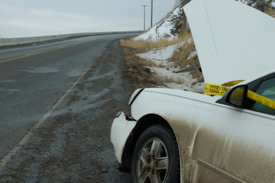 News for Connecticut automobile accident attorneys – Two men were killed after a car traveling in the wrong direction collided with an oncoming vehicle.

Mystic, CT (www.NewYorkInjuryNews.com) – A crash between three cars at approximately 7 p.m. Thursday, March 25, 2010 left two dead and one injured, as reported by TheDay.com.

Reports indicate that Terrence Garbuzinski, 46, of Attleborough, Mass. was driving in the northbound lanes of I-95 when he collided with Lance Lewis, 36, of Batavia, NY, who was driving the wrong way down the highway. Lewis’ Honda briefly caught on fire after impact. A third party, Veronica Crowley, 55, of Stonington, CT was traveling behind the northbound Garbuzinski when the accident happened and subsequently struck Garbuzinski’s car.

Both men were pronounced dead at the scene. Crowley was taken to Lawrence and Memorial Hospital, where she was being treated for non-life-threatening injuries.

The highway was closed for approximately five hours while police investigated the circumstances of the accident. An officer reported the woman involved was unable to offer a solid account of the accident, other than to say she saw the two cars hit and “go up in the air.”

State police Sgt. William Bohonowicz said emergency dispatchers at Troop E in Montville answered several calls regarding a driver headed the wrong way on I-95 and that those calls were still coming in as the lines then flooded with calls reporting the crash.