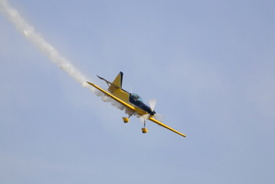 Edgewater, MD (www.NewYorkInjuryNews.com) – Richard Drawyer, 76, of Annapolis, was rescued by a marina resident after his single engine plane crashed into South River on Thursday, March 25, 2010, as reported by Capital Gazette Communications, Inc. According to reports, the pilot was unscathed, but in a bit of shock after the incident.

Witnesses indicate the Cessna 120, a single engine, two-seat light general aviation plane, began flying low over the water at approximately 3:20 p.m. It then made a crash landing into the river just west of the South River Bridge. Liberty Marina tenant JoDee Carvalho and a marina employee sped to the rescue in an inflatable boat. Carvalho reported they found Drewyer “on top of the tip of the plane,” which had already turned over. Carvalho told reporters, “He was in shock, he wasn’t moving much…seemed to be scared out of his wits.”

Upon retrieving the pilot, the good Samaritan handed him over to medics who arrived on the scene.

Officials are in the process of determining who is responsible for retrieving the plane from bottom of the busy river, which is marked by a hazard buoy. The National Transportation Safety Board is heading the investigation.

Dr. Drewyer is board certified in radiology and internal medicine. He practices at Southern Maryland Hospital Center in Clinton.