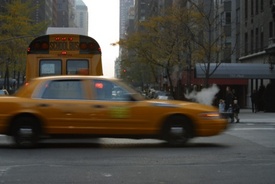 Eight people taken to hospital after car and bus collide in Baltimore.

Baltimore, MD – A crash between a school bus and a car carrying four at 7:45 a.m., March 23, 2010, resulted in injuries ranging from minor to serious as eight people were taken to the hospital, as reported by The Baltimore Sun.

The collision happened at the intersection of Loch Raven Boulevard and Lochwood Road after a car carrying four pulled onto Loch Raven and collided with the bus. The car went airborne and ended up overturned, trapping the passengers inside. A witness to the scene told authorities that two young boys were able to free themselves from the car, but the woman driving the car had to be cut out by firefighters. She was taken to Johns Hopkins Hospital and her injuries have been reported as non-life threatening. The fourth passenger in the car, a seven-year-old girl was taken to Hopkins Pediatric.

Along with the car driver and passengers, two 14-year-old boys, a 12-year-old boy and a 13-year old girl were taken to Johns Hopkins.

The passengers on the bus, four of whom were special needs children, were students at Winston Middle School. There were no serious injuries, but several have complained of aches and pains.

Police are investigating the crash in attempts to find who was at fault.