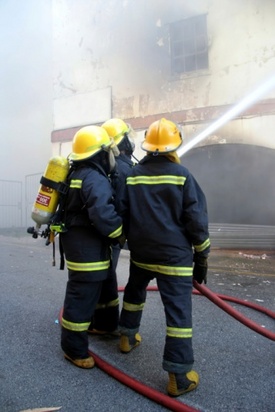 Philadelphia, PA – A 60-year-old man died Tuesday, March 23, 2010 while trying to put out a fire that engulfed his townhouse in north Philadelphia, as reported by philly.com. The two sons made it to safety and the man’s wife was at work.

Fire Commissioner Lloyd Ayers told the press that the man and his two sons were awakened by the alarm of the house smoke detector after the blaze started. The fire was called in at 4:40 am and firefighters arrived within minutes. Upon arrival, the firefighters found a strong fire on the first floor and heavy smoke throughout.

Firefighters managed to rescue one of the sons, who had escaped to the roof. The second son had remained within the home in attempts to help the father extinguish the fire. Ayers reported the son “made out but the dad didn’t.”

The blaze was declared under control within 16 minutes of the firefighters reaching the home. The father’s body was found in the front living room, where the blaze had started. Ayers further stated that the smoke detector was working, but not properly positioned, which would have allowed it to sound earlier.

As a further precaution, the Commissioner reminded the press that the age old message firefighters try to convey is that homeowners should always get out of the fire.