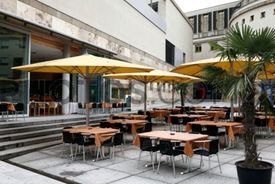 Manhattan, NY (www.NewYorkInjuryNews.com) – Rafael Bernitt filed a class-action labor lawsuit in Manhattan federal court Tuesday, March 16, 2010, claiming that he and other dishwashers were required to work 10-hour days, six days a week for $330 a week. After a $20 a week raise the employees received in December 2009, the weekly pay reached $350, still far below the legal minimum wage, as reported by New York Daily News.

In addition to unjust payment, Bernitt’s suit describes deplorable conditions such as being placed in a cramped space “between the coal burning ovens and the sinks, in stifling heat, with almost no ventilation, and in a puddle of hot water which constantly leaked from the pasta preparation area.”

In addition, the lawsuit relates the employment situation to indentured servitude and states that dishwashers did not receive overtime, sick time, tips, worker’s compensation, insurance of any type or medical benefits. Bernitt was fired in January after three years of employment.

Arista Associates owns six Patsy’s restaurants, three Dean’s restaurants, and three Angelo’s pizzerias. A former manager confirmed that Arista required its dishwashers to work between 60 and 70 hours a week, with no vacation or holiday pay, which is against federal labor laws.

Arista Associates owner, Nick Tsoulos, could not be reached for comment.