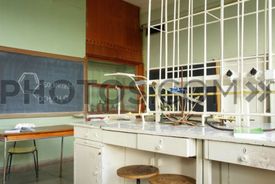 DuBois is enrolled in the electrical trade program at his school. The shock left the high school junior unconscious, possibly stopping his heart, stated the school superintendent, Dr. John O’Connor. His teacher, a certified electrician, performed CPR on him before paramedics reached the scene and took him to the hospital. O’Connor also informed the press that the school’s circuit panels are inspected every year and that a strong emphasis is placed on the safety of the students. In an interview he stated, “We’re not sure if it was relative to his wiring, or whether or not kids were horsing around. We’re not 100 per cent certain on that.” Officials say the maximum voltage in the classroom workstations is 120 volts.

DuBois is a member of the junior hockey team, the Eastern Kodiaks and missed the tournament games that took place over the weekend. DuBois’ father was unable to comment on the subject.

The incident is under investigation by the school and police.