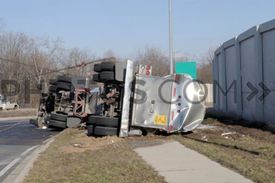 Rochester, NY (NewYorkInjuryNews.com) – A lawsuit stemming from a 2005 fatal bus crash near Geneseo, NY was settled Monday, March 8, 2010, awarding three members of an all-girls hockey team $2.25 million. The crash split the bus in half, killing the team’s coach, Rick Edwards, his son Brian, 13, and the mother of the team’s goalie, Cathy Roach.  19 others were injured in the crash, including the three current plaintiffs.

The wreck was between a chartered bus, carrying the team and a tractor-trailer that was illegally parked on the shoulder of Interstate 390.  Coach Canada, the bus company, had assigned the trip to one of its newest drivers, a 24-year-old Ryan Comfort, who had started with the company a month prior. Comfort drove overnight and into the next day without sleep and veered off the road shortly after 4:00 p.m. on January 29, 2005. He hit the parked trailer, killing three on the bus and the truck driver, who had stopped to let his dogs out.

New York law firm Seeger Weiss represents 11 of the victims and their families. The lawsuit names Coach Canada and J&J Hauling, the owner of the tractor-trailer, as responsible parties. Coach Canada accepted 90 per cent of the responsibility. J & J Hauling accepted the remaining 10 per cent. Lead attorney Chris Seeger stated, “admission of liability is the first phase of trial by the defendants.”