Easton, PA Boy on bike killed after collision with bus 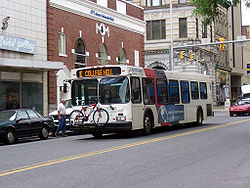 A 13-year old boy died after losing control of bike and crashing into a LANTA bus.

Easton, PA – Robert Mitchell, 13, of Easton, PA, was killed Wednesday, March 17 after riding a bike downhill into the oncoming traffic of Northampton Street. According to Easton police, the boy rode north on South Mulberry Street into the 800 block of Northampton Street and crashed into the front right corner of a Lehigh and Northampton Transportation Authority (LANTA) Metro bus, as reported by The Express-Times.

The boy remained trapped under the wheels of the bus for four hours after the crash as police investigated the scene. His body was freed at 7:30 p.m., after a hydraulic tow truck lifted the bus. Many onlookers expressed dismay at the delay, but Easton police Lt. John Remaley stressed that it was obvious the boy had died during the collision and preserving the scene helped the investigation. Remaley also informed the press the investigation was ongoing and preliminary. He was also unaware if the bike the boy was riding had brakes.

Those who knew the boy said he often played in the neighborhood, and that young bicyclists and skateboarders often sped down South Mulberry Street, turning abruptly or stopping just before reaching Northampton Street. Diana Miller, an Easton Area Middle School cafeteria worker explained the ride as “a dare thing,” and expressed the need for a skate park or a bike park, “somewhere they can go.” Easton Mayor Sal Panto Jr. said he was aware of children playing on the streets near the accident and that city officials have sought safe recreational facilities in the West Ward. He assured the press of intentions to create safer zones for children in stating, “we’ve been working on recreation for a long time in the West Ward.”