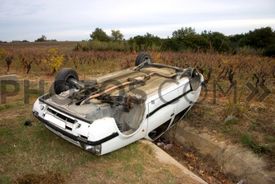 Attleboro, Massachusetts (NewYorkInjuryNews.com) – An accident that occurred at 10:00 p.m. Saturday, March 13, 2010, on I-95 in Attleboro, Massachusetts left the driver and passenger injured and killed an infant who was ejected from the car. Heavy rain swept through the area before the crash and police are still investigating whether it was a factor in the accident, according to The Sun Chronicle.

The driver, Ashley Derochea, 20, of Brockton, Massachusetts, was seriously injured and passenger Michael Cornell, 21, of Taunton was hurt as well. The infant was seriously injured and pronounced dead at Hasbro Children’s Hospital in Providence. Derochea was listed in stable condition at Rhode Island Hospital in Providence Sunday night and Cornell had been taken to the hospital for treatment but was not in patient listings.

The investigation headed by Trooper Allen Luther states that Derochea lost control of a 1998 Honda Accord, causing it to strike the right guardrail and flip over to bounce off the left guardrail. State police are still investigating the crash, with aid from the State Police Crime Scene Services and Collision Analysis Reconstruction Sections.