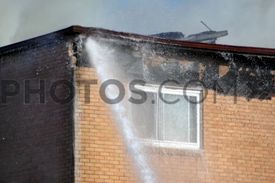 Pittsburgh PA (www.NewYorkInjuryNews.com) – A fire that occurred in a section of row houses in Pittsburgh’s Marshall-Shadeland neighborhood shortly after 1:00 a.m. Tuesday, March 16, 2010, left three Pittsburgh firefighters and one civilian injured. The fire destroyed one family’s apartment and damaged an adjacent unit, which was unoccupied, as reported by WPXI.

Two firefighters sustained minor injuries after falling through a basement stairwell that collapsed, trapping them in the basement. A rescue team was able to pull the trapped firefighters to safety, fire officials said. One was treated at Allegheny general Hospital and released, while the other remained hospitalized. A third firefighter suffered minor injuries after the fire, during the overhaul of the charred building, the fire chief said.

The man who resided in the apartment, Wayne Parker Sr., 54, suffered second-degree burns on his hands, arms, back and chest and was taken to UPMC Mercy Hospital. His son, Wayne Jr. and sister, Angelina Loos, were also in the apartment. Wayne Jr. helped his father exit the apartment before running back inside with another teen to rescue Loos. Both teenagers and Loos escaped injury. Wayne Sr. used oxygen tanks to assist his breathing, which could be heard exploding during the blaze.

Fire investigators said the fire was started by a lit cigarette that ignited clothing after Wayne Sr. placed it on a dresser or nightstand. The family did not have homeowner’s insurance and lost everything. The Red Cross is assisting the family with relocation and replacement efforts.