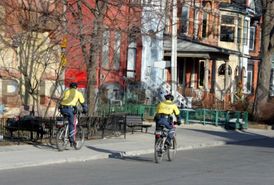 Brooklyn, NY (www.NewYorkInjuryNews.com) – Walter Martin, 83, of Brooklyn and his wife Rose, 82, have been visited by police officers searching for various criminals over 50 times, leaving them to feel as if they are part of America’s most wanted, as reported by the New York Daily News.  The couple’s modest Marine Park house has been the subject of police investigation repeatedly over the past eight years and has been visited by NYPD officers from commands ranging from the north Bronx to Staten Island.

Walter, a WWII veteran, told officers at his door at 7:30 a.m., Tuesday, March 16, 2010, “you’re not the first…We’ve had police here 50 to 75 times looking for people.” The officers departed amidst confusion and Walter “felt funny.” His blood pressure had skyrocketed as result of the early morning scare and took three hours to return to normal.

The couple purchased the often visited home in 1997 in order to be closer to their children. In early 2002, they began receiving junk mail, court documents and arrest warrants for a slew of different strangers. Police visits followed. The phrase “Police! Open up!” became familiar to the Martins, who would open the door to officers as many as three times a week. The Martins remember the most bizarre incident of misinformation to be from a visit on October 10, 2006, when officers and FBI agents showed up in search of Angel Negron, a fellow officer, who was charged with raping his 14-year-old stepdaughter.

The Martins have written to the Police Commissioner, mayor and the U.S. Postmaster General in hopes of fixing this dilemma. They fear for their health. In the letter, Rose explained her concern, “I am fearful that if a no-knock warrant is issued with my address that my husband or I will end up having a heart attack.”

Police attempts to explain the issue are slight. The NYPD’s 61st Precinct once offered the excuse of a computer glitch being the source of their misfortune.