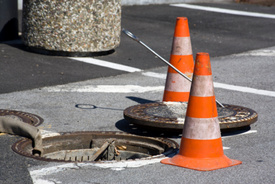 Legal news for Long Island construction accident attorneys –Suffolk County police reported to the scene of a Dunkin Donuts teen worker who fell in a sewage drain in Long Island.

Smithtown, NY (NewYorkInjuryNews.com) – A Long Island Dunkin Donuts worker was fatally injured when he stepped outside to take the trash out and fell into an open sewage pit, Sunday, February 28, 2010, as reported by MSNBC. The teenage worker’s younger cousin, who discovered him drowning in an 8 feet deep sewage pit, called Suffolk County police to the scene.

The frantic boy told the responding police that the worker was no longer visible in the cesspool. Police rescued the drowning teen worker, identified as 17-year-old Amiri Zeqiri, out of the cesspool. It was reported that there was usually a manhole cover over the sewage drain, which was apparently not covering the dangerous opening.

It was reported that the Dunkin Donuts worker had slipped into the uncovered manhole filled with drainage and sewage. Emergency medical services (EMS) rushed to the scene to transport the victim for medical attention. Upon arrival at the area hospital, the teen’s injuries proved fatal and he was declared dead by medical officials. Police continue to investigate the fatal incident. The Dunkin Donuts is located in Smithtown, 40 miles east of New York City. The company that owns the doughnut store was contacted for comments but they were not reached.