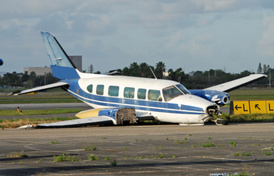 Belize City, Belize (www.NewYorkInjuryNews.com) – A plane crash in Belize claimed the lives of a New York family when the aircraft plummeted to the ground on the island of San Pedro, Friday, February 26, 2010, according to the New York Times.

Officials reported to the scene of the fatal aviation accident where a young husband, wife, and two small children, along with a prominent businessman lost their lives due to mechanical issues with the single engine aircraft.

Authorities reported that the plane was apparently headed to a fundraising event that the pilot, was hosting in San Pedro, when the aircraft suddenly went down near the landing strip at the San Pedro Municipal Airport in Belize around 5:30 p.m. Friday evening. The New York victims of the aviation accident were identified as Michael and Jill Casey, both 32-years-old, their children 3-year-old Makayla, and 7-month old Bryce. The fifth victim and the pilot of the deadly crash was identified as a former Belize senator and well-known businessman, 64-year-old Sir Barry Bowen.

The Casey family, originally from Albany New York, was in Belize teaching at a school for children of agricultural workers, which was owned by Bowen. Investigators continue to look into the fatal and tragic plane crash.