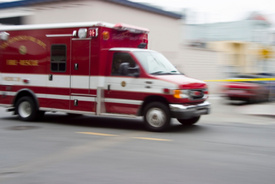 Legal news for Maryland truck accident attorneys – A semi truck crash and a motor vehicle accident shut down the interstate and injured 3 people on I-695.

Ferndale, MD (NewYorkInjuryNews.com) — A tractor-trailer accident and a separate motor vehicle accident involving three cars closed two lanes of Interstate 695 and sent three victims to the hospital around 7:45 a.m. Monday morning, March 1, 2010, as reported by Annapolis Capital. Maryland State police reported to the scene of the semi truck crash, which shut down the eastbound lanes of Interstate 695 near Route 295.

Responding authorities reported that a tractor-trailer transporting sheet metal flipped over and injured the driver. The driver, who remained unidentified, sustained minor injuries. Emergency medical services (EMS) transported him via ambulance to be treated by doctors and nurses at Harbor Hospital located in Baltimore.

Soon after the truck accident, a three-vehicle crash occurred in the eastbound lanes of the Interstate. It was reported that there were two people who sustained injuries in the motor vehicle collision (MVC). Their names and ages were not given. The two victims of the crash were taken via ambulance to Baltimore Washington Medical Center located in Glen Burnie. It was not clear what caused either vehicle accident. Police continue to investigate. At 10 a.m., two of the eastbound lanes were still closed.