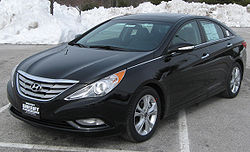 New York, NY (NewYorkInjuryNews.com) – Hyundai Motor will recall 46,000 of the brand new Sonata sedans in South Korea and the United States after the discovery of a faulty front-door latch announced the New York Times, February 24, 2010.

Hyundai Motor plans to recall a total of 46,000 of the vehicles, and 1,300 across the nation. The company planned to inform the South Korean government and the U.S. National Highway Traffic Safety Commission (NHTSA) www.nhtsa.gov of yet another motor vehicle recall. Hyundai is the world’s number four automobile maker, following closely behind Toyota, General Motors, and Volkswagen.

Hyundai reported that there has not been any injuries associated with the recall, but the recall is a response to several consumer complaints. Hyundai released a statement saying, “Since the launch of the Sonata in Korea last September, Hyundai Motor has discovered a mechanical problem with its front door latches which, in very rare instances, will not close properly.”

In 2009, Hyundai sales increased 8.3 percent in the United States when the sales for the rest of the auto industry plummeted 21 percent. Hyundai reported that there are about 5,000 Sonata sedans with a possible door defect, which were all produced at a company plant in Alabama. Last year, Hyundai’s Sonata sedan sales accounted for 37 percent of their nationwide sales.