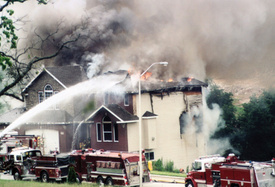 Willimantic, CT (NewYorkInjuryNews.com) – Firefighters were called to the scene of a house fire that injured one firefighter and three residents in Willimantic Tuesday, February 23, 2010, according to the Hartford Courant.

Firefighters arrived at the scene of a two-story home located on Pleasant Street at 1:30 a.m. Tuesday morning. Fire officials reported that one firefighter was injured while battling the blaze. There were also three residents injured in the fire.

Emergency medical services (EMS) arrived at the scene of the blaze to transport the injured to seek medical attention. The three residents were taken via ambulance to be treated by doctors and nurses at Windham Hospital. The extent of their injuries were minor burns and exposure to excessive smoke. The injured firefighter was also transported to the hospital to be treated for a leg injury. His identity was not disclosed. It was not known how the fire started.

It was not reported how long it took responding firefighters to bring it under control. Investigators continue to try to determine what caused the blaze, which appeared to have originated on the second floor. The fire caused major damage to the home, and displaced eight residents. The American Red Cross was at the scene helping the displaced residents.