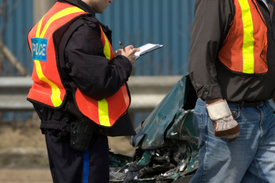 Legal news for New Jersey personal injury attorneys—Police officials investigate the scene where a pedestrian was struck and killed by a motor vehicle, injury in Vineland, NJ.

Vineland, NJ (NewYorkInjuryNews.com) – A male pedestrian from Millville was fatally injured when he was struck by a motor vehicle on Delsea Drive in Vineland Saturday, February 20, 2010, according to Cumberland County News.

Vineland police officials reported to the scene of the accident, which reportedly occurred at 6:14 p.m. on South Delsea Drive also known as Route 47, south of College Drive. Investigators believed that the male pedestrian, identified as 47-year-old Roger Sooy, was attempting to cross the street heading in the westbound direction when a southbound motor vehicle struck and fatally injured him.

The driver, identified as 44-year-old Anita Marte, resident of Vineland, remained at the scene while police investigated the crash. Sooy’s injuries proved fatal at the scene of the accident. Responding police pronounced him dead before medical officials could attempt to save him. Vineland police did not issue Marte a ticket in connection with the fatal accident.

Police did not believe she was at fault. It was not reported if the road was temporarily closed immediately following the accident. The Vineland Police Department Traffic Safety Unit continue the investigation into the fatal pedestrian-motor vehicle accident.