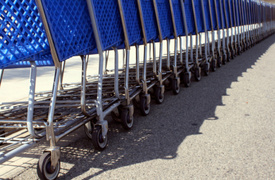 Rutland, VT (NewYorkInjuryNews.com) – A motor vehicle ran over two pedestrians killing one, and critically injuring another in Rutland Tuesday, February 23, 2010, according to the Burlington Free Press.

Vermont State police reported to the scene outside a Hannaford grocery store shortly after tragic accident, which occurred at 2:30 p.m. Horrified witnesses at the scene told police investigators that a 2000 Lincoln Continental was backing up when it struck the two pedestrians. The driver, identified as 87-year-old Wayne Miller, stepped on his brakes, than ran over the two victims who had were already injured lying on the pavement.

Emergency medical services (EMS) arrived at the scene to transport the injured. One of the pedestrians, identified as 83-year-old Sylvia Bersaw, was taken via ambulance to Rutland Regional Medical Center, where her injuries proved fatal and doctors pronounced her dead.

The second injured pedestrian, identified as 55-year-old Joanne Severance, was also treated at the hospital and was released. Miller remained unharmed in the crash, and police allowed him to go home. Police continue to investigate the fatal personal injury accident. There were no citations reportedly issued.