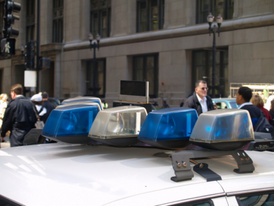 The 27-year-old off-duty officer had a few drinks before getting in his Nissan Altima and crashed into a parked Subaru in Throngs Neck. The Nissan then swerved and slammed into a tree after jumping a curb. Police identified the driver as Officer Roniel Dilone. Emergency medical services (EMS) arrived at the scene and Dilone admitted that he had drank four beers before he got in his car, according to court documents.

Officer Dilone refused to take a Breathalyzer test at the scene. Police got a warrant to check his blood alcohol level and are currently waiting for the results. His passenger, identified as Allan Reyes, was seriously injured in the crash. Medical officials reported he suffered bruised ribs, a broken shoulder and leg.