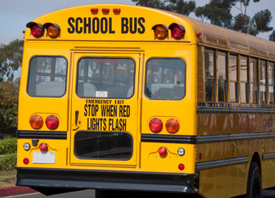 Legal news for New York City personal injury attorneys –Emergency medical services tried to save a Brooklyn boy who was run over by a school bus in New York City.

Brooklyn, NY (NewYorkInjuryNews.com) – A Brooklyn boy was running to catch his school bus when he slipped on ice and slid under the large tires of the bus on Wednesday, February 17, 2010, according to New York Daily News.

The four-year-old boy was then run over by the Yeshiva school bus as horrified witnesses and the boy’s older brother looked upon the tragic scene in the middle of Borough Park Street. Amron Alman’s backpack laid a few feet away from the boy’s tiny body, who was a few feet away from his home. NYPD reported to the scene where witnesses told the story of the how the boy was rushing to get to his school bus when he slipped on some ice and slid under up under the bus, unbeknown to the driver who then pulled away and ran him over.

Emergency medical services (EMS) arrived at the scene and paramedics attempted to revive the boy with no luck. His 13-year-old brother was running with him when they emerged from over a snow bank and Amron fell under the bus. His brother tried to save him, but could not reach him before the school bus pulled away from in front of their house.

Pedestrians alerted the oblivious bus driver to stop a few blocks down the road. The driver was reportedly unaware of the horrific accident and police reported that the driver would not face criminal charges. One of the boy’s neighbors was reportedly furious that the ice was not removed from the streets where the boy had slipped.