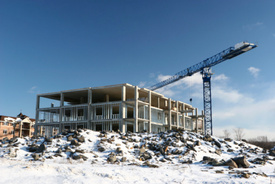 Legal news for Pennsylvania construction accident attorneys – A construction worker was injured and another trapped after snow collapsed on them at a site.

Valley, PA (NewYorkInjuryNews.com) — Construction workers were installing a compressor station at a site in Valley when one worker was injured and another trapped by an avalanche of snow that fell off a buildings roof at 5 p.m. Tuesday, February 16, 2010, according to the Daily Review.

The other workers quickly pulled them out from under the collapsed awning, where the workers discovered that one of the MEC Construction workers was injured. The other worker walked away from the accident unharmed. Fire officials reported to the scene of the construction accident, where they found the injured worker conscious and suffering a potential broken leg. The unidentified worker was transported via ambulance to be treated at ACMH Hospital.

Company officials reported that they were installing a compression station to propel natural gas from wells created in the Allegheny National Forest to go to a distribution and storage unit. The fire departments that assisted at the scene were from Rural Valley, Rayburn and Kittanning Township. It was not reported if the Occupational Safety and Health Administration was involved at the scene to investigate the construction accident.