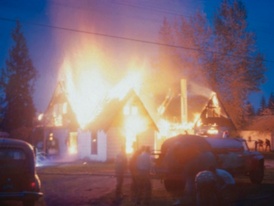 Utica, NY (NewYorkInjuryNews.com) – A house fire at 910 Shaw Street in Utica caused extensive damage to the two-family home and injured one firefighter Friday night, February 12, 2010, according to WKTV.

Firefighters responded to the call about the house fire to quickly extinguish it. A Utica Fire Chief reported that the two and a half story home began to turn into a fiery inferno around 9:30 p.m., Friday evening. When firefighters arrived, they were prepared to make a search and rescue attempt due to an initial report that there was someone trapped in the burning house, however, upon arrival everyone in each of the families were accounted for.

One Utica firefighter sustained minor injuries while at the scene of the blaze. The firefighter reportedly had shards of glass stuck in his hand. Medical professionals who were at the scene said that he required attention from doctors at the hospital to pull the glass out of his hand. It was not reported what hospital the injured firefighter was taken to for treatment. Officials reported that there were no other injuries reported in correlation to the house blaze. The National Grid also took action to cut the damages in the inferno by shutting off the power to the home. Fire marshals arrived and work to determine the cause of the inferno.