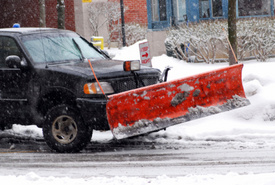 Legal news for Maryland truck accident attorneys –Emergency medical services, rushed to the scene where a tractor-trailer had struck a snow removal truck, injuring one.

Baltimore, MD (NewYorkInjuryNews.com) – A tractor-trailer struck and injured a SHA worker in his truck while he was removing snow off the Baltimore Beltway Thursday afternoon, February 11, 2010, according to WBALTV.

Police and emergency medical services (EMS) arrived at the scene of the truck accident on the Outer Loop of the Beltway between Edmondson Avenue and Route 40 around 2 p.m.

The worker, identified as 36-year-old James Flutka, sustained injuries in the truck accident. EMS transported the injured worker via ambulance to be treated by medical professionals at the Shock Trauma. The extent of Flutka’s injuries was not known. His condition was only said to be non-life threatening.

The operator of the semi truck was identified as 48-year-old Robert Scolaro, resident of Florida. He was transporting diapers at the time of the crash. Police reported the truck plowing snow had a sign on it warning the drivers to move away from the slower lane. The semi truck operator remained unharmed in the accident, and was given a traffic violation for failure to control speed. There were no other vehicles involved in the truck accident. The scene of the accident was temporarily closed off from traffic for thirty minutes for clean up.