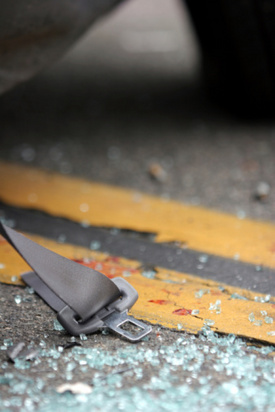 Rochester, NY (NewYorkInjuryNews.com) – Rochester police reported to the downtown scene of a two-vehicle crash involving a tractor-trailer, which sent four victims to the hospital, Friday, February 12, 2010, according to Rochester Democrat and Chronicle.

Police responded to the truck accident at East Avenue and Pitkin Street where the semi, traveling southbound on Pitkin swerved and crashed into a car traveling in the westbound lanes. The car ended up on the sidewalk from the impact of the crash, which occurred at 12:50 p.m.

There were five occupants in the car at the time of the accident. Four of them sustained injuries— one of which suffered life-threatening trauma. The ambulances arrived with medical officials to treat and transport the injured. Two people sustained severe injuries. The four victims were taken to area hospitals to be treated by doctors and nurses. Police did not report their identities.

The operator of the tractor-trailer remained unharmed in the accident. His identity was not disclosed. Rochester police reported that there was a working traffic light at the intersection. They continue to investigate to determine who was at fault for the serious motor vehicle accident. The truck operator and witnesses were questioned at the scene.

The intersection was temporarily shut down as well as connecting streets so that police could continue to probe the scene of the motor vehicle accident.