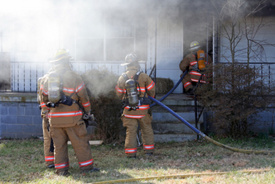 Leitersburg, MD (NewYorkInjuryNews.com) – Large flames rose from the one-story home as firefighters rushed to the scene and the residents ran back inside the inferno to search for their beloved pets Tuesday, February 9, 201, announced the Herald-Mail. Firefighters reported to the scene on 13509 Little Antietam Road around 12:20 p.m. The flames continued to rage on as firefighters prepared to battle the inferno. The fire quickly consumed one side of the house, which the couple said had begun in the sunroom.

The owners of the home, Terry and Judith Brewer had escaped form the house safely, but then ventured back into the dangerous structure in one last desperate to search for their pet cats and ferrets. The couple sustained injuries along with two firefighters. Emergency medical services (EMS) arrived at the scene to transport the injured. Judith sustained second-degree burns to her face and arms, and Terry sustained chest pains and was treated for smoke inhalation. They were both taken to Washington County Hospital. Judith was later transferred to Bayview Medical Center.

One firefighter was treated at the hospital for overexertion while another injured firefighter was treated for a facial injury, which he sustained due to a piece of falling debris off the house. They were both treated and released. It took responding firefighters 20 minutes to bring the flames under control. Four cats and two ferrets were discovered dead inside the destroyed home. Fire officials continued to work to determine what started the fire. The Red Cross assisted the now displaced family.