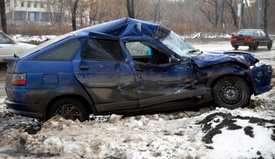 Franklin Township, PA (NewYorkInjuryNews.com) – A pedestrian was struck and killed by a motor vehicle, which was then struck by two more cars on U.S. Route 15 in the southbound lanes Wednesday night, February 10, 2010, according to The Patriot-News.

Northern County Regional police reported to the scene of the three-vehicle accident. It was reported that the pedestrian was standing outside his vehicle that had become struck in a snow bank on the side of the highway, when he was struck by a 2006 Honda Element. A 2002 Dodge Ram then struck the Honda, driven by 63-year-old Nancy Slater, resident of Newfield, New York. The driver of the Dodge was identified as 43-year-old Anthony Moats, whose vehicle was then crashed into by a 2007 Chevrolet Equinox, driven by 50-year-old Michael Mummert, resident of Wauseon, Ohio.

Police reported that the crash took place at 7:30 p.m. in the southbound lanes of U.S Route 15, where Emergency medical services (EMS) rushed to the aid of the severely injured pedestrian and one of the injured passengers. Police reported that the pedestrian was identified only as a 62-year-old man, who was declared dead shortly after the accident. EMS transported one of Slater’s passengers, identified as 47-year-old Joan Cain, resident of Newfield, N.Y. via ambulance to be treated at Holy Spirit Hospital. Her condition was not known. The other drivers and passengers involved remained unharmed in the motor vehicle accident. The pedestrian’s name was withheld due to pending notification of his family.