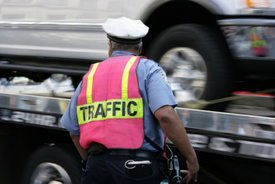 Police and emergency medical services (EMS) arrived at the scene of the crash at the intersection of Highland Street and Salmon Falls Road. Firefighters were also on the scene to assist. Police investigators revealed that a 200 Chevy Blazer had been traveling north on Salmon Falls Road when it crashed into a 1992 Toyota Camry, which was heading down Highland Street. The driver of the Chevy was identified as 51-year-old Ellen Daigle, resident of Rochester, who allegedly ran a red light at the intersection when the motor vehicle accident occurred.

The impact of the accident caused the Blazer to rollover onto its side. The Camry driver identified as 30-year-old Kenneth Smith survived the crash unharmed, but his 9-year-old daughter was taken via ambulance to a local hospital for non-life threatening injuries. Police reported that vehicles had to be towed from the scene due to the significant damage sustained in the motor vehicle accident. Daigle was issued a summons for running the red light.