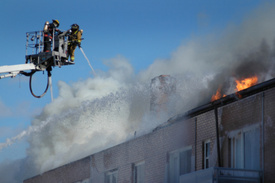 Fire officials and police investigators continue to look into what may have caused the blaze. It was not reported if police were suspicious of arson. After the fire was extinguished, the building sustained so much damage from the flames, smoke and water that the displaced residents had to seek other forms of temporary shelter on their own.

The families in the nearby buildings were permitted to go back into their homes that night. It was not reported how long it took firefighters to get the flames under control. One of the 74-year-old residents sustained shortness of breath and was transported to Hoboken University Medical Center to be treated. It was not reported if the injured firefighters were taken to the hospital for treatment. The investigation continues.