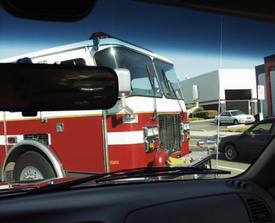 Newton, NJ (NewYorkInjuryNews.com) – A firefighter was injured when a pickup truck struck his ladder fire engine as he was responding to a chimney blaze on Sunday afternoon, February 7, 2010, according to the Daily Record.

Police reported that the Chevrolet Silverado pickup truck, driven by 21-year-old Aaron Armstrong, was heading south on Water Street approaching a three-way intersection when it struck a ladder truck traveling down Mill Street heading toward Trinity Street. The ladder truck had its lights flashing and sirens blaring indicating it was responding to a call, when the pickup crashed into the ladder truck, and injured both the firefighter, identified as 28-year-old Chief Jason Miller, and Armstrong.

Lakeland Emergency Squad arrived at the scene to transport both the injured men at Newton Memorial Hospital. Miller complained of pain in hip and collarbone. Armstrong said that he had pain in his neck and head as a result of the crash. Miller’s three passengers refused medical treatment.

Both motor vehicles were towed form the scene due to damages from the impact of the accident. It was unclear how fast each vehicle was going at the time of the crash. Another fire truck was quickly dispatched by the Newton Fire Department to go to the scene of the chimney blaze. Police have not charged anyone in correlation to the crash. The accident remained under investigation.