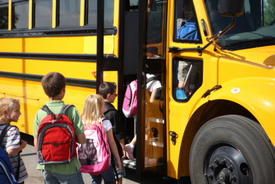 Suffolk County police arrested school bus driver, Norman Besemer on Monday night, February 1, 2010 for pending allegations that he had taped a boy’s mouth shut while he was driving him home from school. The 10-year-old boy boarded the school bus from Frank P. Long Intermediate School located in Bellport on January 15, when 61-year-old Norman Besemer put clear-plastic tape on the boy’s mouth. It was not known why the bus driver taped the young boy’s mouth shut. Suffolk County police continue to investigate to determine what happened.

Frank P. Long Immediate School is part of the South County Central School District. The Administrators at the school posted an update on the schools website about the current investigation with the bus driver. Besemer was an employee of Montauk Bus Services. Besemer was fired after the inappropriate incident for “endangering the welfare of a child”. The bus driver is expected in the First District Court in Central Islip on March 30, 2010.