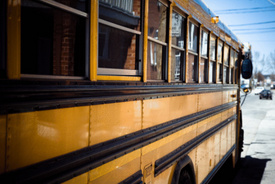 Town of Manlius, NY (NewYorkInjuryNews.com) – A school bus transporting eight children was involved in a motor vehicle accident Thursday morning, February 4, 2010, according to The Post-Standard.

Police responded to the crash and arrived at the scene at East Taft and Fremont Roads where the motor vehicle accident took place around 7:17 a.m. as reported by Onondaga County emergency 911 services. Minoa fire rescue officials also arrived at the scene to assist. The East Syracuse-Minoa school bus had been transporting the children to Woodland Elementary School.

After the crash, another school bus was sent to take the children the rest of the way to school for their morning classes. The children were first examined by medical personnel on the scene and then checked again by a school nurse. The driver of the school bus remained unharmed in the wreck.

It was not clear what caused the motor vehicle accident; police continue to investigate how the bus and the other vehicle collided. It was not known if the occupants in the other vehicle were injured or not. The Superintendant of Woodland Elementary School is awaiting a police report with the cause of the accident. The parents of the children involved in the crash were notified of the accident as a standard district procedure. Police continue to investigate.