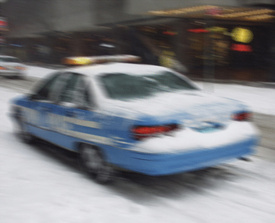 Massapequa, NY (NewYorkInjuryNews.com) – Two Nassau police officers were traveling in a squad cruiser with lights flashing and sirens blaring when they collided with another vehicle, Saturday night, January 23, 2010, according to the Long Island Press.

The collision occurred at 10:23 p.m. when the police cruiser was heading northbound on Broadway when they collided with a 2008 Dodge Charger that was traveling westbound across Broadway from Park Hill Avenue. The Nassau police cruiser was en route to help a fellow officer who was on Jerusalem Avenue in Seaford.

Emergency medical services (EMS) arrived at the scene of the motor vehicle accident to transport the injured for treatment. Two of the occupants in the Dodge and the two Nassau officers sustained injuries in the wreck. All four of the injured were taken via ambulance to be treated by doctors and nurses at Nassau University Medical Center located in East Meadow.

Medical officials reported the officer, who was driving the police cruiser, sustained a leg injury and was stable. The passenger police officer sustained minor abrasions and suffered from head pain. The occupants in the Dodge both suffered from potential traumatic brain injuries. The investigation continues to determine what caused the motor vehicle accident.