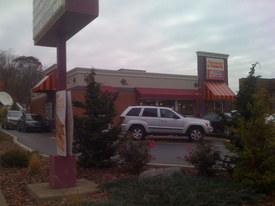 Needham, MA (NewYorkInjuryNews.com) –- A sport utility vehicle crashed into the front of a Dunkin Donuts injuring a customer and an employee, Wednesday, January 27, 2010, according to the Boston Globe.

Needham police reported to the scene where a gold 2007 Lexus SUV sat in the Dunkin Donuts lobby as 20 bystanders gathered outside the devastated storefront on Chestnut Street. Police reported that the Lexus had crashed through the shop at 12:45 p.m. The driver of the vehicle, identified as 62-year-old Sherborn woman and her passenger were injured and were taken via ambulance from the scene. Their injuries were not specified.

The owner of the Dunkin Donuts said that only one of her employee’s sustained minor injuries in the crash. One of the customers also sustained injuries when the SUV crashed through the building. The cost of the damages was not reported. The four victims were taken via ambulance to Beth Israel Deaconess Medical Center, where doctors and nurses treated them.

A tow truck company and Needham firefighters were at the scene to work pull the SUV back out of the shattered storefront. Firefighters had to pull apart the remaining doorframe so that the SUV could be removed from inside the shop. The SUV was finally removed from inside the store at 3 p.m. Police continue to investigate to determine what caused the accident to occur.