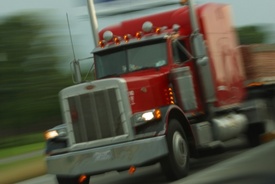 New York, NY–The Department of Transportation (DOT) www.dot.gov had announced a new regulation for commercial truckers and bus drivers nationwide the makes sending text messages illegal while they are in the drivers seat, Tuesday, January 26, 2010, according to New York Times. The DOT goal is to reduce the numbers of distracted drivers on the road and hopefully reduce the amount of crashes. Those drivers operating the buses and commercial trucks that violate the new regulation can face criminal or civil fines of a maximum of $2,750.

The DOT also plans to make efforts to expand this law to create regulations to restrict commercial truck and bus drivers when using their cell phones and other communication devices while driving. DOT officials hope to place regulations on the use of computers that sit on the dashboards, which truckers use to communicate with dispatchers. Studies have exhibited that drivers are more likely to get into an accident if they are doing multiple tasks at once.

The DOT began this new regulation for the safety of the vehicle operator as well as for other drivers on the road. The regulation on texting while driving is a new interpretation of an existing safety rule, reported the DOT. Advocates for Highway Safety, a non-profit agency’s Vice President, stated this new safety regulation is a “welcomed first step”