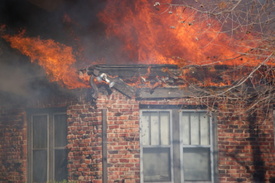 Churchville, NY (NewYorkInjuryNews.com) – Churchville firefighters responded to a call at 12:40 p.m. Friday afternoon, where smoke rose from a residents burning home, January 22, 2010, according to the Rochester Democrat and Chronicle.

Firefighters from four local companies responded to the blaze that displaced a mother and her son from their home at 29 Ridgefield Drive. Firefighters were alerted to the blaze by a neighbor who had been outside getting his mail when it noticed the black cloud forming over their home. He rushed over to his neighbor’s house and banged on the door and told them to call 911.

Karen Dermody and her son Ryan escaped their home unscathed due to the warning of their observant neighbor. Firefighters battled the flames until 2 p.m., when the blaze was finally brought under control. It did not reportedly spread to any of the surrounding residences. There were three firefighters who sustained minor injuries while combating the inferno.

They were transported via ambulance to area hospitals to be treated. The identities of the injured firefighters were not known. The American Red Cross of Greater Rochester assisted at the scene with the displaced family. The cause of the blaze has yet to be determined.