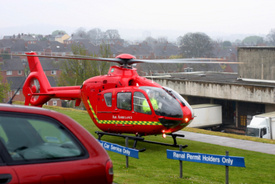 Glasgow, DE (NewYorkInjuryNews.com) – A pickup truck collided with a car near the entrance of Peoples plaza on U.S. 40 at 4:15 p.m. Monday, January 11, 2010, according to The News Journal.

Delaware State police arrived at the scene to discovered a damaged 1999 Toyota Tacoma that had rolled several times and sat in the parking lot in the Valero gas station. The driver had been violently ejected from the vehicle and was found by responding officials. The severely injured man, identified as Michael Boyd, was taken away in a trauma helicopter to be cared for by medical professionals at Christiana Hospital. He was reportedly in critical condition.

Investigators state that after the pickup truck changed lanes it crashed into a 2001 Acura Integra that slid under the belly of the truck and launched it sideways causing it to flip over. State police discovered that the only passenger traveling in the front seat of the pickup, identified as 22-year-old Jared Shifflett, suffered fatal injuries in the collision. He was launched 25 feet out of the vehicle upon impact. Officials declared him dead at the scene. Neither Jared nor Michael had been wearing their seatbelts.

Police identified the driver of the Acura as 40-year-old Cranston Raison, was treated at Christiana Hospital. His injuries were not considered fatal. Police continued to investigate at the scene of the U.S. 40 fatal collision to gather evidence and determine the cause. Normal traffic flow was affected for hours after the crash.